The hecatonicosachoron, or hi, also commonly called the 120-cell, is one of the 6 convex regular polychora. It has 120 dodecahedra as cells, joining 3 to an edge and 4 to a vertex. 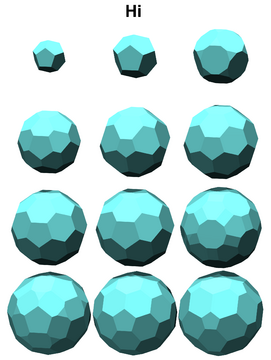 The vertices of a hecatonicosachoron of edge length 1, centered at the origin, are given by all permutations of:

together with all the even permutations of:

The surtope angle represents the fraction of solid space occupied by the angle.

The higher order angles might be derived from the tiling x5o3o3o5/2o, which is piecewise-finite (ie any surtope can be 'completed')

A hecatonicosachoron has the following Coxeter diagrams:

Retrieved from "https://polytope.miraheze.org/w/index.php?title=Hecatonicosachoron&oldid=34576"
Categories:
Cookies help us deliver our services. By using our services, you agree to our use of cookies.