The hexadecachoron, or hex, also commonly called the 16-cell, is one of the 6 convex regular polychora. It has 16 regular tetrahedra as cells, joining 4 to an edge and 8 to a vertex in an octahedral arrangement. It is the 4-dimensional orthoplex.

It and the great duoantiprism are the only uniform duoantiprisms, and it is the only one that is convex and regular.

It is one of the three regular polychora that can tile 4D space, the others being the tesseract and the icositetrachoron. Tiling it results in the hexadecachoric tetracomb. 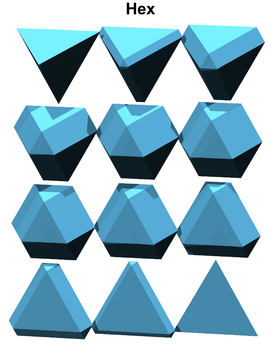 The vertices of a regular hexadecachoron of edge length 1, centered at the origin, are given by all permutations of:

They can also be given as the even changes of sign of:

These are formed by alternating the vertices of a tesseract.

The surtope angle represents the portion of solid space occupied by the polytope at that surtope.

These are derived from the regular tiling x3o3o4o3o.

A hexadecachoron has the following Coxeter diagrams:

Besides the regular hexadecachoron, other types of polychora with 16 tetrahedral cells exist:

The hexadecachoron is the colonel of a two-member regiment that also includes the tesseractihemioctachoron.

Two of the seven regular polychoron compounds are composed of hexadecachora:

Retrieved from "https://polytope.miraheze.org/w/index.php?title=Hexadecachoron&oldid=37555"
Categories:
Cookies help us deliver our services. By using our services, you agree to our use of cookies.