The icositetrachoron, or ico, also commonly called the 24-cell, is one of the 6 convex regular polychora. It has 24 octahedra as cells, joining 3 to an edge and 6 to a vertex in a cubical arrangement. It is notable for being the only regular self-dual convex spherical polytope that is neither a polygon nor a simplex.

It is also one of the three regular polychora that can tile 4D space in the icositetrachoric tetracomb and is notable for having the same circumradius as its edge length.

It can be constructed by attaching 8 cubic pyramids to the cells of a tesseract, or by rectifying the regular hexadecachoron. 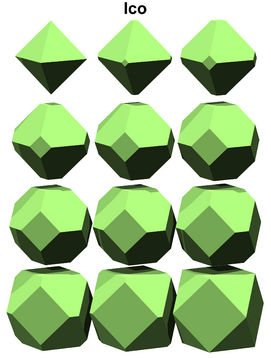 The vertices of an icositetrachoron of edge length 1, centered at the origin, are given by all permutations of:

The dual icositetrachoron to this one has vertices given by all permutations of:

This shows that a unit tesseract, as well as a hexadecachoron of edge length

, can be inscribed into the icositetrachoron.

This is the fraction of solid space around a given surtope, against all-space

An icositetrachoron has the following Coxeter diagrams:

The icositetrachoron has a wide variety of colorings that remain isogonal or isochoric, most of which do not have variations in the measures however:

It is possible to diminish an icositetrachoron by cutting off cubic pyramids, each of which deletes one vertex. If the vertices corresponding to an inscribed hexadecachoron are removed, the result is the regular tesseract.

The icositetrachoron can be cut in half to produce two identical octahedra atop cuboctahedra.

Many other CRF polychora can be obtained as various vertex subsets of the icositetrachoron. Among the more interesting is the fact that an icositetrachoron can be decomposed into 6 triangular antiwedges.

Retrieved from "https://polytope.miraheze.org/w/index.php?title=Icositetrachoron&oldid=37550"
Categories:
Cookies help us deliver our services. By using our services, you agree to our use of cookies.