The pentachoron, or pen, also commonly called the 5-cell or the 4-simplex, is the simplest possible non-degenerate polychoron. The full symmetry version has 5 regular tetrahedra as cells, joining 3 to an edge and 4 to a vertex, and is one of the 6 convex regular polychora. It is the 4-dimensional simplex.

In addition, it can also be considered to be the regular-faced pyramid of the tetrahedron, or the pyramid product of a triangle and a dyad. This makes it the simplest segmentochoron as well, and it is designated K-4.1 in Richard Klitzing's list of convex segmentochora. It is also the 5-2 step prism and gyrochoron. 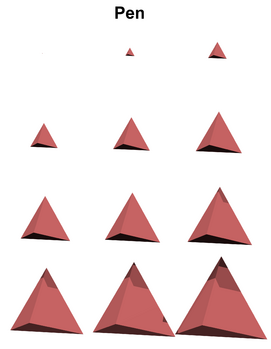 The vertices of a regular pentachoron of edge length 1, centered at the origin, are given by:

Much simpler coordinates can be given in five dimensions, as all permutations of:

A further set of coordinates, derived from the step prism construction, is given by:

together with reflections through the x=y and the z=w hyperplanes.

The surtope-angle represents the fraction of space occupied by an element.

A pentachoron has the following Coxeter diagrams:

Besides the regular pentachora, various other types of pentachora exist, some of which occur in vertex figures. These include:

Two pentachora can be attached at a common cell to form the tetrahedral tegum.

Two of the seven regular polychoron compounds are composed of pentachora:

Retrieved from "https://polytope.miraheze.org/w/index.php?title=Pentachoron&oldid=35306"
Categories:
Cookies help us deliver our services. By using our services, you agree to our use of cookies.