A convex polytope is, loosely speaking, a polytope without clefts and without self-intersections. Convex polytopes represent convex sets, sets of points such that every point in any line segment defined by a pair of points in the set is also in the set. Similarly to the notion of a polytope itself, there are various similar but distinct notions of convex polytopes: some authors define all polytopes as convex point sets, thus making every polytope automatically convex,[1][2] while others treat convexity as a property of a general polytope.[3] This article deals with the latter notion.

Furthermore, convex polytopes of various classes lend themselves to enumeration more easily. For example, though the enumeration of uniform polyhedra wasn't completed until 1953 and wasn't proven complete until 1975,[4] the Archimedean solids could've been discovered as early as 200 BCE by Archimedes.[5] Likewise, while the classification of non-convex uniform polychora remains open as of 2020,[6] the convex uniform polychora have been enumerated since 1965.[7] This in part due to the fact that convexity imposes a requirement on the angles meeting at each element (e.g. in a polyhedron, the angles meeting at each vertex can't exceed 2π), while general polytopes have no such requirement.

A polytope is strictly convex if it is convex and no two facets are in the same hyperplane. This additional requirement is used in the definitions of the Johnson solids, Blind polytopes, and CRF polytopes to restrict the possibilities.

All of the following are examples of convex polytopes:

The following are examples of non-convex polytopes:

The convex hull X of a set of points S is the smallest convex set containing such points, in the sense that any other convex set that contains the points of S also contains the set X. Intuitively, it can be thought as the shape that an elastic hypersphere (or a rubber band in the 2D case) would take when fit around the points.

There isn't a single standard, agreed upon way to define the property of convexity for a general polytope. Oftentimes, convexity is just determined visually, following the loose description of "a polytope without clefts and self-intersections". The following are more rigorous definitions used by various authors:

Convex polytopes can be defined in terms of the convex hull as follows:

A convex polytope is a polytope equal to the convex hull of its vertices.

Alternatively a polytope is convex if it is the convex hull of some finite set of points.

The notion of a convex polytope can be defined recursively, as a polytope satisfying the following four characteristics:

A convex polytope may be defined as one whose interior has a unique density of 1 and is a convex set. 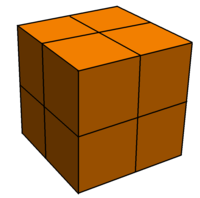 This polyhedron with 24 square faces is convex by the interior definition but not by the convex hull definition or the recursive definition.

In addition to convexity and strict convexity, there are a number of other weaker forms of convexity employed in different contexts.

A polyhedron, 𝓟, is quasi-convex if all the edges of its convex hull are edges of 𝓟. This definition was introduced by Norman Johnson for the study of Stewart toroids. All convex polyhedra are quasi-convex.

Jessen's icosahedron is weakly convex but not convex.

Retrieved from "https://polytope.miraheze.org/w/index.php?title=Convex_polytope&oldid=71226"
Category:
Cookies help us deliver our services. By using our services, you agree to our use of cookies.