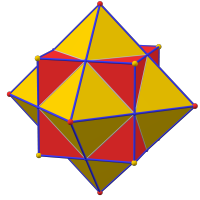 The cube is the dual of the octahedron. The vertices of each correspond with the faces of the other, as do the edges of both.

The facets of a dual polytope are given by the duals of the vertex figures of the base polytope.

If the dual of a polytope is topologically equivalent to the base polytope, then the base polytope is called self-dual. Among the regular polytopes, the regular polygons, the simplexes and the icositetrachoron are self-dual. Meanwhile, the hypercubes and the cross polytopes form dual pairs, as do the dodecahedron and icosahedron, and the hecatonicosachoron and the hexacosichoron.

be an abstract polytope. Its dual is defined as

Abstractly, duals are uniquely defined for each polytope. However, when building concrete, geometrical duals, there’s not a single way to define the positions of the vertices of a dual polytope.

The naive approach to building the vertices of a dual is to place a vertex at the center of each facet of the original polytope. This method works fine for any polygon, or for any regular polytope, where it always yields another regular. It also works well on Euclidean polytopes. Nevertheless, this will in general produce polytopes with skew facets, and is hence undesirable.

The standard approach to build duals of spherical polytopes is via spherical reciprocation. A hypersphere is placed, most often one of unit radius centered at the polytope’s center, if it exists. Every facet of the original polytope is then reciprocated with respect to this hypersphere. That is, we first take the projection

onto the hyperplane of the facet. Then, we map the facet onto the unique point

is the radius of the hypersphere. All other elements can then be built from the corresponding incidence relations.

For non-skew polytopes, spherical reciprocation is guaranteed to yield non-skew duals, except when any of the facets passes through the hypersphere’s center, in which case its inversion can either be left undefined or be declared to be “at infinity” on the affine plane. Furthermore, if an n-polytope is transitive in its rank k elements, the dual centered at the polytope’s center will be transitive in its rank n–k elements.

It can sometimes be useful to take duals from an "imaginary" hypersphere whose squared radius is negative. Mathematically, this amounts to taking signed distances in the reciprocation formula, and the whole line instead of just the ray. For instance, the lace of a polytope and a dual with a negative squared radius results in a retroprism.

Retrieved from "https://polytope.miraheze.org/w/index.php?title=Dual_polytope&oldid=37850"
Cookies help us deliver our services. By using our services, you agree to our use of cookies.