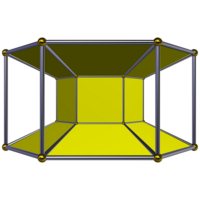 A square-hexagonal duoprism can be seen either as squares wrapped around a hexagon, or viceversa.

The prism product is an operation that can be applied on any two polytopes. They extend the notion of a prism, which may be seen as a polytope (traditionally a polygon) extended through a line, to that of a polytope extended through any other. More precisely, the prism product of two polytopes A and B is formed by placing a copy of A at each vertex of B, so that the hyperplanes of the copies of A intersect the hyperplane of B at a single point. Its facets will be the prism products of the facets of each polytope with the other polytope. The neutral element of this product is the point.

Polytopes resulting from n prism products can be called n-prisms. In the general case, these are called multiprisms or simply prismatic polytopes.

A point on the interior of a triangular prism

The rank of the prism product of two polytopes A and B is equal to the sum of their ranks. As a result, up to 3D, prism products simply correspond to prisms. The simplest duoprism that can't be represented as a prism is the 4D triangular duoprism.

Any duoprism based on two uniform, scaliform, isogonal, or CRF polytopes will also maintain those properties. In addition, the duoprism of 2 identical isotopic polytopes is also isotopic.

The volume of the prism product of a set of polytopes is simply equal to the product of their volumes.

The circumradius of the prism product of a set of polytopes equals the square root of the sum of the squared circumradii of each of the polytopes (via Pythagoras).

To get the element counts of a duoprism, one can write polynomials P(x) and Q(x) for its factors, so that the coefficient ak of P(x) equals the number of elements of rank k on the first polytope, and ditto for Q(x) and the second polytope. The element counts can then be read off from the polynomial P(x)Q(x). Contrast this with the pyramid product, where the single element of minimal rank is included as well.

The most general way to define the prism product is abstractly. The prism product of two polytopes defined by posets P and Q is the direct product of P and Q, with all of the elements (p, q) where exactly one of p and q is of minimal rank taken out. In other words, this is the poset on

with the relation such that

To make this concrete, it suffices to map all elements of the form (vertex, vertex) to the points resulting from concatenating the coordinates of the corresponding concrete vertices.

Retrieved from "https://polytope.miraheze.org/w/index.php?title=Prism_product&oldid=35257"
Category:
Cookies help us deliver our services. By using our services, you agree to our use of cookies.