The tesseract, or tes, also sometimes called the 8-cell or octachoron, is one of the 6 convex regular polychora. It has 8 cubes as cells, joining 3 to an edge and 4 to a vertex. It is the 4-dimensional hypercube.

It is one of the three regular polychora that can tile 4D space, similar to hypercubes of any other dimension. The tiling is the tesseractic tetracomb.

The tesseract has the same circumradius as its edge length.

The name tesseract comes from the Greek τέσσαρα (4) and ἀκτίς (ray), referring to the four line segments meeting at each vertex. It was coined by Charles Howard Hinton. Other names include 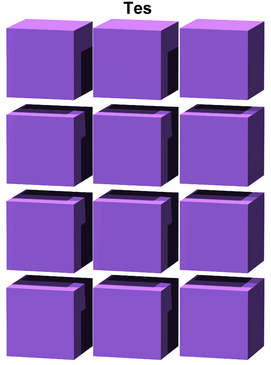 The vertices of a tesseract of edge length 1, centered at the origin, are given by:

The surtope angles measure the proportion of space that the polytope measures at that point.

A tesseract has the following Coxeter diagrams:

Besides the regular tesseract, there are various other polychora with 24 quadriateral faces and 8 hexahedral cells with lower symmetry. These include:

A tesseract can be decomposed into 8 CRF cubic pyramids. If these cubic pyramids are attached to the cells of a tesseract the result is a regular icositetrachoron, as adjacent square pyramids merging into octahedra.

Two of the seven regular polychoron compounds are composed of tesseracts:

Retrieved from "https://polytope.miraheze.org/w/index.php?title=Tesseract&oldid=36377"
Categories:
Cookies help us deliver our services. By using our services, you agree to our use of cookies.